You're very lucky, you lot.

You have a huge selection of eResources available for FREE from your library. From audiobooks, newspapers and magazines, to IT training, independent films, and video-based learning courses ranging from health & fitness to job interview techniques.

Have a look at our shiny new eResources leaflet (feel free to download, or pop into your local library to pick one up). 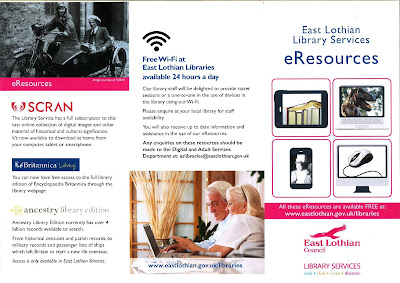 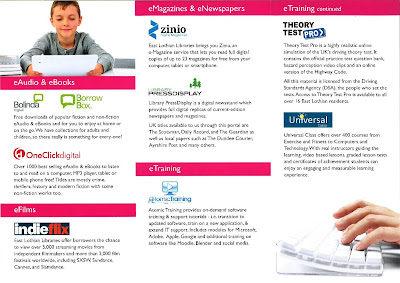 Posted by East Lothian Libraries at 08:18 No comments:

The authors have come and gone, crafts have been crafted, food cooked, plays played and poems read. The events were taking place county wide and this year we branched out to use even more venues out with our libraries.


The Week kicked off with all the pupils at Kings Meadow and the primary 4-7s from St Mary’s and the Compass School file into the Corn exchange in Haddington – they just kept on coming and we realised to our dismay that the 450 seats we’d set out weren’t going to be enough. Luckily the 2 Steves (Steve Barlow and Steve Skidmore) had no difficulty performing to an audience of 500! Elsewhere Mac and Bob entertained primary 2 and 3 pupils in Musselburgh library, Judy Hayman came along to the John Gray Centre to tell more dragon tales, the Muddy Buddies helped the kids take over Dunbar library, where the teddies also slept over after watching Muppet treasure island and lots of Dads felt the Force when they joined in with the Star Wars party at Longniddry library.


We were delighted to welcome Mark Beaumont, long distance cyclist and adventurer, to the Brunton, Musselburgh where 170 folk enjoyed hearing about Mark’s exploits cycling the world and rowing, and capsizing, in the Atlantic. One of his most recent endurance feats was cycling the new Scottish North Coast 500 (mile) route in less than 38 hours – without stopping!


St Mary’s Parish church in Haddington provided the atmospheric setting for our Urban Noir evening in the company of crime authors Arne Dahl, Eva Nolan and Stuart Neville. This heralded the start of our mini crime festival which also featured Ann Cleeves who enthralled a capacity audience in Port Seton Centre, Lin Anderson visiting past haunts in Tranent, and Ed James, along with Len Wanner, who ended their own tour of East Lothian on the Saturday night at Cockenzie House.


This year our Reader in Residence, Hannah Lavery, who is also director of CoastWord based in Dunbar, organised several events with words and songs featuring Michael Pedersen,  Rita Bradd, Rachel McCrum, Kirsty Law, Catherine Simpson, Colin Will, Firefly Forty Five – to mention only a few! Thanks to the Dunmuir Hotel in Dunbar for hosting some of these events and to Village pub theatre who came along to North Berwick library to perform some appropriately themed literary and library plays.


Professional chef and food writer Christopher Trotter extolled the virtues of kale at Simon’s Kesley’s bookshop in Haddington; AnneMarie Allan told of the Witches of East Lothian and local author David Robertson spoke of George Seton, 5th Earl of Wintoun who was tried for treason for joining the Jacobites, but escaped from the Tower of London and ended up in Rome, where he died in 1749. Closer to home locals enjoyed seeing pictures and sharing memories of life and history in East Linton.


Some staff from Haddington library were very pleased with the Christmas decorations they made under the watchful eye of Abby Ingham, although they probably didn’t quite match up to the arrangements demonstrated by Erica of Haddington!


Around 1460 people attended 30 events so it’s been a busy time, but hugely enjoyable and a massive thanks to all our speakers and guests and of course to all the library staff, our Reader in Residence and all the helpers for making this the most successful Book Week Scotland yet!

Posted by East Lothian Libraries at 08:44 No comments:

A few tips for Christmas...

Need some tips for Christmas dinner or festive goodies? Try browsing our resources on Christmas cookery for some inspiration.

Music! But what type? Traditional carols, cheesy pop, classical or choral?  Perhaps some Christmas opera? Whatever tickles your fancy, we have a huge selection for your listening pleasure while you cook, eat, dance, or wrap presents. Just follow the link here.

Now, everyone loves a Christmas movie (even you die-hard Scrooges out there (die-hard, ha! See what we did there?!)), so why not browse our Christmas DVDs: Prestonpans Library recently received a fine selection of Christmas themed movies, and North Berwick Library are having a Classic film promotion. Contact the Libraries for more details or browse here.

We all know how excited the wee ones can get on Christmas Eve (No, not the Christmas elves). Remember, we have books! Lots and lots of children’s Christmas stories, perfect for settling the wee ones down after they’ve carefully hung their stockings, chosen and laid out Santa’s milk and cookies. Have a look here.

You can also listen to all of our children’s eAudiobooks for FREE – from classics such as Alice’s Adventures in Wonderland, The Wonderful Wizard of Oz, and Charlotte’s Web to contemporary wonders such as Neil Gaiman’s Fortunately the Milk, Sonya Hartnett’s The Midnight Zoo, and the award-wining children's author Leigh Hobbs.

If you’re not much of a Christmas fan and would rather hibernate into the new year, but you can’t, because you’re human, then let us help you through the holiday season with some alternative suggestions…

Longniddry library are having a Crime for Christmas promo with a carefully selected collection of TV and Film titles. Contact the library for details, or browse our catalogue here.

We have a HUGE selection of FREE magazines and newspapers available online – just think of the savings! Browse the December issues of magazines such as Women’s Weekly, BBC History, Focus, Marie Clare, and Radio Times. Click here for more information.

We also have a wealth of eAudiobooks and eBooks waiting for you to discover: listen to award winning fiction such as Joyce Carol Oates’s We Were The Mulvaneys, Lisa Unger’s Fragile, or Andrew O’Hagan’s Be Near Me, and autobiographies such as Cheryl Strayed’s Wild, Andrew Hodges's biography of Alan Turing, or Janet Frame’s Towards Another Summer.

And remember, you have extended borrowing time over the festive period - anything you borrow from Friday 4th December you have until Tuesday 5th January to return. How good is that!

Posted by East Lothian Libraries at 07:54 No comments: