Posted by East Lothian Libraries at 03:00 No comments: 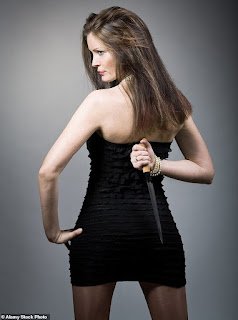 Why so many women like me are addicted to true crime serials: As figures show 80% of fans of grisly podcasts are female, novelist and self-confessed devotee JANE GREEN reveals the gripping psychological reasons

By JANE GREEN FOR THE DAILY MAIL

Should you see me walking my dog, staring out of a train window or driving up the motorway, you will notice I have earphones in. You might assume I'm listening to some great music or chatting to my nearest and dearest, but you would be wrong.

The truth is far darker.

I have become obsessed with true crime. If I'm not reading about it or watching it on television, I am listening to every podcast I can find. The darker and more twisted the story, the more gruesome the details, the more I crave it.

I was slightly worried there was something wrong with me until I spotted on Instagram that, just before giving birth, the pop star Rihanna settled down to what she described as 'some serious self-care: a nice face mask, belly covered in moisturiser, relaxing in front of serial killer documentaries'.

As for celebrities, Gwyneth Paltrow, Lady Gaga, Chrissy Teigen and Gigi Hadid are just some of those who have revealed their fascination with true crime. Gigi even studied criminal psychology at college.

And it's not just adult women. I had never in my life known a forensic psychologist but now I know three 18-year-olds — all girls — who are going to university to study the subject. It turns out that 78 per cent of forensic scientists in the U.S. are now female.

A quick survey of my male friends resulted in blank looks. They have never heard of Dirty John — the evil fraudster whose terrorisation of multiple women inspired a hit Netflix film. My female friends devoured the series. So what is it about women and our obsession with true crime?

Young women make up an astonishing 80 per cent of true crime podcast listeners and according to Dr Julia Shaw, a criminal psychologist and co-host of the true crime and science podcast Bad People, on BBC Sounds, there is a reason for this.

'Women seem particularly interested in the intricacies of the criminal mind,' she says. 'There is a real drive to understand the 'why', not just the 'how' of the crime.'

As young girls, we are trained to keep an eye open for something strange, suspicious or dangerous. That man staring a little too hard in the train compartment; the man in the supermarket we hardly know being over-friendly; the man walking too close behind us down a quiet street.

Which woman doesn't know the feeling of dread, the quick crossing of the road, the getting away and the relief that nothing bad happened. Between 1985 and 2010, 70 per cent of serial killers' victims were female.

There is no escaping the fact that we are more vulnerable.

Claire Bord, publisher at Bookouture, which publishes crime thrillers including those written by Gregg Olsen, explains: 'These kind of storylines tap into dark themes that resonate with readers because we can see ourselves in these everyday scenarios and then imagine what could happen.

'I also think there are aspects of the dark themes explored in psychological thrillers, and indeed true crime, that can speak deeply to readers who have experienced difficult times in their own lives.'

However strong we may feel, however strong we may be, most of us have had an encounter that has made us uncomfortable at the very least, and with that discomfort comes the recognition of our own vulnerability; that we are no match for a man bigger and stronger than us.

If we can't compete physically, then perhaps we can outsmart men — and in order to outsmart them, we have to understand them.

Indeed, the more we know about true crime, the more likely we are to think we would be able to get out of a sticky situation.

Because I listen to true crime, I know about things such as 'roofies' (Rohypnol pills, aka 'the date rape drug') being slipped into drinks at a bar or club when women go to the loo. I would never have thought twice about leaving a drink unattended before. Now that drink is either being brought with me or will be downed in one before I even think about trotting off to the loo.

Dr Shaw believes that if true crime is done well, it should foster an understanding of the triggers and consequences of crime.

'It encourages us to engage with the realities of victim experiences, understand the pathways to crime and come to understand how we can prevent it from happening.'

As a novelist, I may be a professional storyteller but I like to think we are all storytellers — and who among us doesn't like to play out their own narrative?

I'll see a couple arguing in a café and watch them carefully, trying to eavesdrop, attempting to determine what they are fighting about. In the old days, I might have wondered if the woman had just found out the man was having an affair.

Now I'm far more likely to wonder whether he is considering ways to kill her. If he's clever, perhaps he will order arsenic online — but not from his computer because that's how they always get caught. Maybe she'll hire a hitman, but I hope it's not an undercover police officer.

Answer, I wouldn't. And if I did, I definitely wouldn't write about it first, unlike the romance novelist Nancy Crampton Brophy, who has just been found guilty of murdering her husband, having once written an essay entitled How To Murder Your Husband.

Then there are the women who are just plain crazy murderous, such as those featured in the 561 episodes of the podcast series Snapped: Women Who Murder. Given that women are usually the victims rather than the perpetrators, this is an extraordinary roll call of women visiting terrible crimes on their husbands, lovers, best friends and even children. That women, who are supposed to be the nurturers, can act in such ways never fails to hold me rapt.

'Compared with men, women are more often expected to understand and empathise with people,' says Dr Shaw — so part of our fascination in such cases lies in the struggle to understand how a mother can murder (for instance) her own children.

Dr Shaw adds: 'True crime can act as a mirror that forces us to deconstruct our own dark side, while making it clear that criminals are ultimately just humans rather than unknowable monsters. That's an important lesson that many people can benefit from.'

Well-produced shows allow us to follow the developments step by step without being spoon-fed. Attempting to work out the who and the why, and the satisfaction of piecing it all together, rather like slotting in the last piece of a complicated jigsaw puzzle, is enormously satisfying.

We get an adrenaline rush as the dreadful pieces start to fit together, much like the adrenaline rush we used to get listening to scary stories when we were children —particularly when the storyline centres on a family we can relate to.

We women, with our intuition and natural empathy, may entertain dark thoughts when our buttons are pushed but few of us would ever follow through. We are fascinated by dark stories but our moral codes would — hopefully — prevent us carrying anything out.

I remember talking to the CNN anchor Alisyn Camerota about her time spent working on the U.S. TV show America's Most Wanted, where she met murderer after murderer. What was it like, I asked breathlessly, expecting her to say that their evil was palpable. But no. What struck her most was how ordinary they were, how their crime was so often a moment in which self-control was lost.

Which means it could be any one of us. Going through a stressful time, add in financial strain, a husband who doesn't lift a finger, the dog peeing on the rug because no one let him out, coming home to a sink overflowing with dirty dishes and a huge amount of laundry that no one else has touched, and the mildest of us would want to scream.

We like to think we have the mechanisms to stop ourselves before we go too far. But the woman who drove through a red light and almost ploughed into you, ending in a screaming match through open car windows? How much would it take for that woman to get out and stab you?

So now I have finally curbed my road rage, my true crime addiction having made me far more aware of the tipping point. In the old days, I might have wound the window down and screamed in rage at that woman. Today, I'm far more likely to mutter quietly to myself and ignore her bad behaviour.

If anything happens to me, it's unlikely to be a random driver and far more likely to be my husband. But by now I'm pretty sure I know enough to foil any dastardly plans, should he be foolish enough to try.

These are my favourite true crime podcasts, all accessible through Apple or Google's podcast apps.

The science and psychology behind true crime, hosted by Dr Julia Shaw.

2 Root of Evil: The True Story of the Hodel Family and the Black Dahlia (eight episodes)

A series dedicated to the famous 1947 Black Dahlia murder in Los Angeles.

A hairstylist and an autopsy technician talk about all things spooky.

A lighthearted romp through the places where murder and the paranormal meet.

Truth is truly stranger than fiction in this tale of a smalltown murder.

A story even Hollywood couldn't have imagined.

Missing. Murdered. Wanted. Serial killer. They're all here, weekly, since 2017.

So many murderous females . . . based on a long-running U.S. TV show.

The newest addition to the stable, based on a 2001 case of a woman's death 'falling down the stairs'.

This show, about a murder in Wisconsin, started the craze. Did he or didn't he do it?

A documentary just as compelling almost 20 years on as when it first aired.

Two parents dead, their sons in the dock — the gold standard in true-crime telly.

A celebrity-studded, glamorous yet complex tale of tragic death.

The story of a brutal murder and the framing of five teenagers.

A favourite for those who enjoy a bit of online sleuthing — animal lovers track down a sick cat killer.

10 Under the Banner of Heaven (out in July) Disney+

Investigating the murder of a woman and her baby girl.

Posted by East Lothian Libraries at 06:46 No comments: