The Local History Centre at Haddington Library is now temporarily closed and we are no longer taking enquiries for a temporary period. We apologise for any inconvenience this may cause our customers.  This is to allow the local history and archives team to work on the archive and local history collections and make preparations  for the move to the John Gray Centre, Lodge St, Haddington  which will open in March 2012. An exact opening date for the new facility will be announced shortly. We look forward to welcoming you to the new archive and local history centre in 2012 and appreciate your support whilst we make the necessary preparations.
Posted by East Lothian Libraries at 07:55 No comments:

Writer of the Year announced 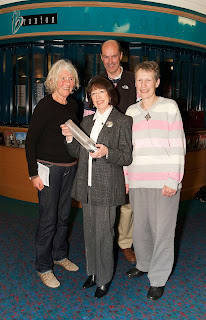 More than 100 writers from Midlothian and East Lothian took part

Writer of the Year for 2011 across East and Midlothian was announced at an awards ceremony at the Brunton Theatre on Monday 31st October. Judges AC Clarke and Tom Bryan were on hand to present the prizes and spoke about why they chose the winning entries.
The awards were sponsored by Kesley’s Bookshop of Haddington with the donation of book tokens as prizes and the overall winner was presented with the fabulous Writer of the Year trophy by glass artist, Alison Kinnaird, from Temple. The overall winner will also receive a master class in creative writing from Tom Murray, Tyne and Esk’s Creative Writing Fellow.
More than 100 entries were received for the competition which is run by Tyne and Esk Writers with the support of East Lothian and Midlothian Libraries.
The overall Writer of the Year Award and first prize in the East Lothian prose category went to Marie MacPherson for Birth. The runner up was Jean Cole for Picture This.
First prize in the East Lothian poetry category went to Ian Murphy for his poem How come, Dad? and the runner up was Cindy Stevens for her poem The Innocent.
First prize in the Midlothian prose category went to Mary Johnston for Getting His Ain Back and runner up was Andrew Broadfoot for Feathers.
First prize in the Midlothian poetry category went to Lesley Kelly for Mrs Campbell Reacts Tae the Falklands War and runner up to Rachel Woolf for The Arithmetic of Passing Time.
Eight writing groups meet regularly across the two local authority areas and are open to anyone with an interest in developing their creative writing. Further information is available through the local library service or from http://www.tyne-esk-writers.com/
Posted by East Lothian Libraries at 08:51 No comments: