at the Brunton Theatre, Musselburgh

for the awards ceremony of

Who Else Writes Like....? is now available for the first time online and is designed to help anyone who enjoys reading fiction to expand the number of writers they read. It is designed to answer the perennial question "I've read all the books by my favourite authors, who shall I read next?"

Simply follow the links to find an author whose books you like, and see which other writers are recommended underneath.

The following information is included about each author (where known):

•Dates of birth and death
•Nationality (or place of birth) of authors who are not English
•Genre and, in some cases, subgenre, or type of novel
•A link to their own website
•Pseudonyms
•Key Characters and/or Environment, Occupation
•Prizes won
•Whether their books may be suitable for young adults
•Whether they also write for children

Posted by East Lothian Libraries at 08:15 No comments: 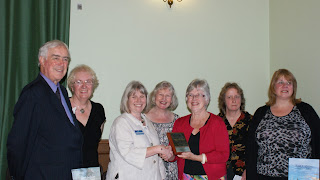 The production of a seven volume series East Lothian 1945-2000, Fourth Statistical Account, which offers interesting insights into the daily lives of people within the county since World War II, has led to East Lothian Library Services winning the prestigious Alan Ball Local History Award for 2010.

The East Lothian Fourth Statistical Account provides an invaluable resource for students and researchers as well as being of interest to local people.

The first three Statistical Accounts of Scotland were published in the 1790s, 1830s-40s and 1950s respectively and provide a rich and informative history of the parishes of Scotland. East Lothian was one of the first Scottish counties to update the Accounts to 2000, thus providing a history of the county spanning more than 200 years.

The East Lothian Fourth Statistical Account Society was set up in 1998 with an Executive Committee of Stephen Bunyan (Chair), David Moody (Treasurer), and Michael Cox (Hon Secretary). Heritage Lottery funding of £30,000 was granted, to be matched by volunteer hours and input. Editor Sonia Baker was appointed in November 2000 and volunteer researchers and writers were contacted throughout the county. They put in a huge amount of work and produced vast amounts of information that was then edited by Sonia for publication in book form.

The seven volumes deal in depth with the villages and towns and the daily lives of their inhabitants, including the social, political and economic history, geography, environment and people of East Lothian since World War II. They provide a wonderful reference tool for students and researchers as well as general readers.

The Alan Ball awards were instituted in 1985 to encourage local history publishing by local authorities across the UK. Alan Ball was Chief Librarian of the London Borough of Harrow and in his name up to three awards are made each year. There have been very few Scottish winners so East Lothian Libraries' success in the main award is a tremendous achievement.


Copies of the Fourth Statistical Accounts can be bought from East Lothian Library Services. For more information contact libraries@eastlothian.gov.uk

Posted by East Lothian Libraries at 07:51 No comments:

The winners of the Young Writer of the Year across East and Midlothian have been announced. The competition sponsored by The Seabird Centre in North Berwick and organised by Tyne and Esk Writers in conjunction with East and Midlothian Libraries attracted a record number entries this year.

An award ceremony took place recently at the Town House in Haddington, where the winners were presented with their prizes; a £20 book token for the best poetry and poem in two age groups from East Lothian and Midlothian and for the two overall Young Writer of the Year winners a family day out to the Scottish Seabird Centre plus a boat trip on Seabird II sponsored by the Scottish Seabird Centre.

Tom Murray, Creative Writing Fellow for Tyne and Esk Writers and judge of the competition said “These were exceptional stories and poems and a joy for me to read. Testament, if any is needed, of the wealth of creative talent amongst young writers across the two regions. The overall winners amongst the best I've read in a long time.”

The winners in East Lothian were:

Title of entry: The Brain in the Cupboard.

The winners in Midlothian were:

Title of entry: The Tiger Within me


The overall title of Young Writer of the Year went to Kiera McIntosh—Michaelis ( Beeslack Community High School) for her prose piece “She Thieves” and the overall primary winner to Ailsa Homewood (Glencorse Primary) for her poem “The Tiger Within me”. Both winners are from Midlothian.
A booklet containing all the winning entries was given to the successful participants and copies are being sent to schools and libraries across the two local authority areas.
Posted by East Lothian Libraries at 03:41 No comments: