Posted by East Lothian Libraries at 08:04 No comments:

We have a fantastic programme lined up for you this year, with an all star cast! Nick Crane, co-presenter of Coast, TV vet Steve Leonard, crime writer James Oswald, hugely popular children's author Barry Hutchison; Peter Kerr, author of Snowball oranges, they'll all be beating a path to East Lothian to join us during Book Week.
The chance to meet Alexander McCall Smith for a literary lunch has already sold out but to make up for that disappointment we can offer a special deal on tickets for our Saltire Taste and Talk event at Colstoun House, near Haddington. Tickets are available from Haddington library for just £8.00 until 19th November, instead of the full price of £12.50. This is an incredible opportunity to meet Mary Contini, Sue Lawrence, Mark Greenaway, Christopher Trotter and Wendy Barrie - see the attached programme for full details. The event starts at 10.30am, finishing at 7.00pm and the one ticket provides admittance to all these sessions.
Book Week this year is from 21st to 27th November.
Book Week Scotland Brochure

Posted by East Lothian Libraries at 07:56 No comments:

The Clyde Valley Stompers became, in the 1950s, Scotland’s premier jazz band. They were the focus of “Stompermania” and enjoyed huge commercial success. And then in 1963 they disappeared mysteriously from the scene. In “Don’t Call me Clyde!” clarinettist Peter Kerr tells the story of what actually happened. How, at just 20 years of age he inherited Leadership of the “Clydes, how they achieved chart success, were produced by George Martin, soon to sign the Beatles, and were launched into the glitzy world of mainstream popular music.


This fondly recounted, entertaining and humorous memoir by the award-winning author of the Snowball Oranges series, chronicles the highlights, hardships, backstabbing, generosity and greed that marked the rise and fall of such an iconic band. But Peter also skilfully portrays an affectionate recollection of family life during the austerity gripped years following the Second World War.


Peter will be appearing in the Star Room, John Gray Centre, Haddington on Tuesday 16th August at 11.00am.


All welcome to this free event. Peter will also be signing copies of his books.
Posted by East Lothian Libraries at 08:47 No comments:


Don’t miss this opportunity to pick up some fantastic bargains. Also look out for our brand new book tombola, colouring-ins for the youngsters and a visit from Lennox the Library Lion!

Posted by East Lothian Libraries at 08:44 No comments:


Posted by East Lothian Libraries at 03:49 No comments:


THIS MUST BE THE PLACE


Tickets are £5, redeemed if you purchase a copy of the book on the night,

and are available from Simon Kesley bookshop and Haddington Library at the John Gray Centre. 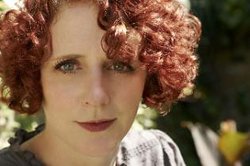 Posted by East Lothian Libraries at 04:13 No comments:

Focus On . . . Biographies and Memoirs

Well, we meant to make this a monthly post but you library members have been keeping us busy with book requests and suggestions. Which we love. Keep it coming!

This month we're suggesting titles from our Biographies & Memoirs collection:


Kevin Bridges has become a household name in just a few short years (well, ten years). He walked on stage for the first time aged 17 and brought the house down with his five minute set. This is his story.


The group NWA emerged from the mean streets of Compton in Los Angeles, California, in the mid 1980s and revolutionized Hip-Hop culture with their groundbreaking music and lyrical realism about life in the hood.

You can reserve the title here


There is no one quite like Brian Blessed. He's an actor, film star, trained undertaker, unlikely diplomat, secret romantic, martial artist, and mountaineer. He's also a brilliant storyteller who will - and you must brace yourself - simply leap out of the pages at you.


All 13 episodes from the second season of the Netflix comedy drama adapted from Piper Kerman's memoir about her time spent in a women's prison. A moving and hilarious experience.

Posted by East Lothian Libraries at 04:26 No comments:


Catherine’s debut novel, Truestory, tells of a young boy with Autism who refuses to leave his family’s isolated farm and interacts with the world via his computer. His mother feels trapped there with him and the novel is told from her point of view. The novel was inspired by Catherine’s experience of raising her own daughter who has autism.

Catherine is a novelist, short story writer and journalist. She was born and raised on a Lancashire dairy farm but now lives near Edinburgh. Truestory won the Scottish Book Trust “New Writers Award” for the opening chapters. Her work has been published in Gutter, New Writing Dundee and The Scotsman among others and short listed in the Bloody Scotland Short Story Competition and the Asham Award. Fellowship. She won Tyne and Esk Writer of the Year, 2013, and the Coastword Festival Short Story Competition in 2014.
This is a Haddington festival event. Free programmes and tickets for some festival events will be available to buy from the library.

Posted by East Lothian Libraries at 03:38 No comments:

Focus on . . . Fiction in Translation

To coincide with the launch in our eNewsletter (which you can sign up for here), this month sees the beginning of our "Focus on" feature - suggesting new releases by genre in a variety of lending formats such as film, eAudio, and eBook.

This month we're focusing on Fiction in Translation; there's a vast array of fiction being produced, and if you look beyond your native tongue you'll find some gems. Luckily, our Librarians are on hand to carefully select a few of our recent additions.

An astonishing interweaving of myth, fantasy, history and autobiography, Kenzaburo Oe's Death by Water is the shimmering masterpiece of a Nobel Prize-winning author.

You can reserve this eBook here.

A romantic drama based on the novel by Posy Simmonds. Village baker Martin Joubert has an obsession with the Flaubert novel 'Madame Bovary' so when a young English couple move into the village, he is delighted to learn their names are Gemma and Charles Bovery.

As he gets to know the Boverys he realises that their lives are running in parallel to those of the characters in his favourite novel and when Gemma embarks upon a passionate affair, Martin fears his new friend is heading for a tragic end like that of her namesake

You can reserve this DVD here

You can reserve this book here

Deutschland 83 is a coming-of-age story within a suspenseful thriller, set against the real events, culture wars and political realities of Germany in the 1980s.

You can reserve this DVD here

Lisbeth Salander and Mikael Blomkvist have not been in touch for some time. Then Blomkvist is contacted by renowned Swedish scientist Professor Balder. Warned that his life is in danger, but more concerned for his son's well-being, Balder wants Millennium to publish his story - and it is a terrifying one.

More interesting to Blomkvist than Balder's world-leading advances in Artificial Intelligence, is his connection with a certain female superhacker. It seems that Salander, like Balder, is a target of ruthless cyber gangsters - and a violent criminal conspiracy that will very soon bring terror to the snowbound streets of Stockholm, to the Millennium team, and to Blomkvist and Salander themselves.

You can reserve this eAudiobook here

Posted by East Lothian Libraries at 06:53 No comments:

National Libraries Week is upon us!
We have a plethora of events and goodies happening - have a look: 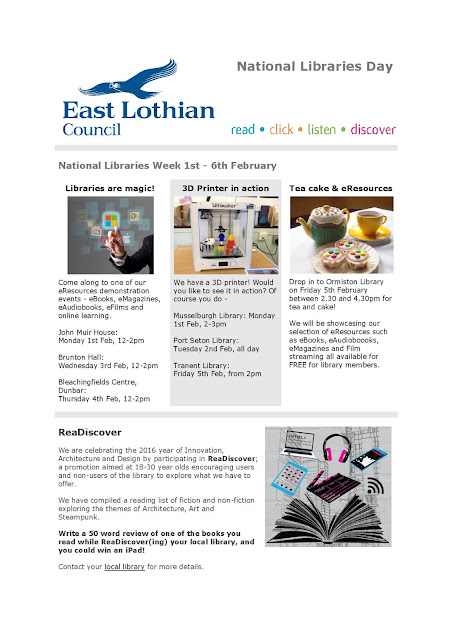 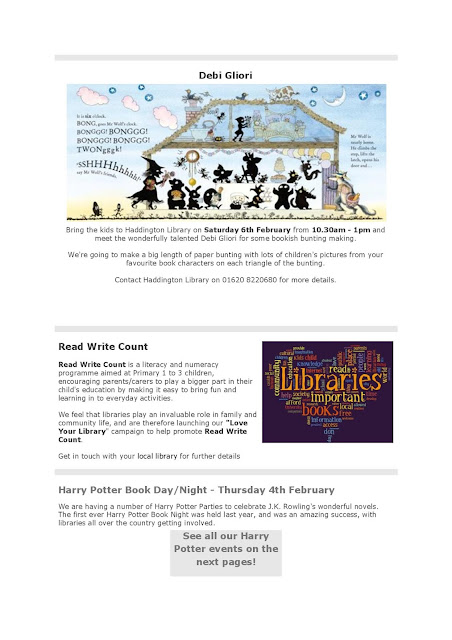 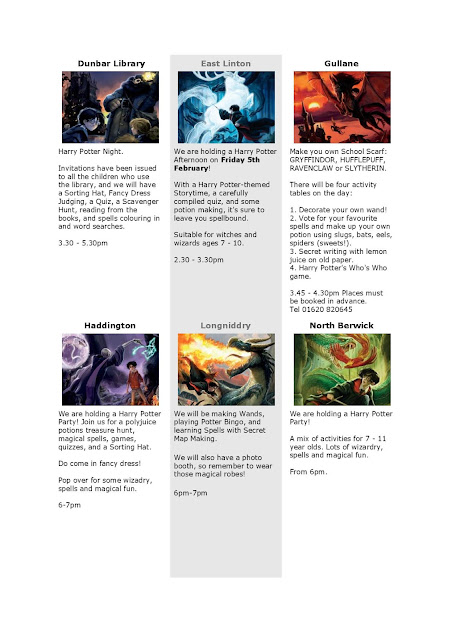 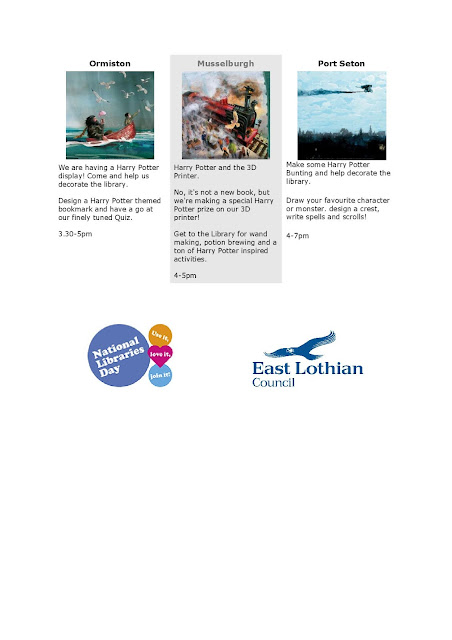 Posted by East Lothian Libraries at 01:14 No comments: