It's all happening in the John Gray Centre!

There’s so much going on in the John Gray Centre in Haddington over the next couple of weeks, definitely something for everyone. Come and visit us, we’d love to see you!
JUNK-VENTIONS
As part of Inventions week, call in to the Star room to create your own robot from scrap materials. What will you come up with?
Drop in activity for families, no need to book. Suggested donation £2.00 per family/group
Friday 18th October, 1.30pm to 3.30pm.


DOWN TO EARTH WITH A BUMP: diary of a first time dad
Join Andrew Watson who will be giving us the benefit of his hilarious experiences of being a first time dad. Definitely not to be missed by expectant parents!
Come along for a chat and a laugh, coffee and biscuits.
Free
Saturday 19th October, 10.00am to 12 noon


IM’S TALES
Do you have a family story or memory you’d like to share? Tim Porteous, who writes Tim’s tales in the East Lothian Courier, would love to meet you for an informal chat about the stories that are important to you. He’ll be waiting for you in the library, just come along.
Tuesday 22nd October, 2.00pm to 3.30pm


KEEP CHILDREN SAFE ON LINE
For interested parents of pre-school to 9 year old children. Learn how to keep your kids safe on-line.
A free event in the Star room, coffee and biscuits provided.
Thursday 24th October, 10.00am to 12 noon


COTTISH BOOK TRUST AWARDS
A listen and look at this year’s nominated titles for the 7-11 year old category. We’ll look at each of the three books, then you may want to vote for your favourite.
A free drop in session in the library.
Friday 25th October, 12.15pm


THE JOYS AND TERRORS OF EARLY MOTORING
Join the friends of the John Gray Centre for this entertaining talk by Dr Alastair Durie.
Free event in the Star room. Wine, nibbles and good conversation!
Tuesday 29th October, 7.00pm - please note this event has now been cancelled


SPOOOOKY HALLOWEEN CRAFTS
Come along dressed up for Halloween fun – the spookier the better!
Book your place at the library counter, £2.00 per child (primary school age).
Thursday 31st October, 4.30pm to 6.00pm


EAST LOTHIAN’S POOR
A talk on the historical records by Joy Dodd and Frances Woodrow. Come along to hear of the fascinating and often moving stories that lie within the Poor Rolls and Parochial Board minutes held at the John Gray Centre archives. It is also a chance for you to get involved with the Friends of the John Gray Centre. These fascinating records will be used in our first major digitisation project.
Wine and nibbles. Free
Thursday 7th November, 7.30pm


A LITTLE BIT OF DON GIOVANNI: pop up opera
A 20 minute taste of Mozart’s much loved opera. Join us for this specially written version of Don Giovanni complete with a Scottish Opera singer, musicians, colourful illustrations and a storyteller to bring it all to life.
Free event in the library, just drop in
Sunday 10th November, 1.30pm and 3.00pm


LADIES – GIVE US YOUR SUPPORT!
Join the Bra amnesty – give all your old bras a new lease of live and help raise money for our breast cancer research. Deposit your unwanted, wearable bras in the bra bank in the library and they will be whisked away to Africa where this is a short supply of affordable bras. “Against breast cancer” will receive a donation based on the weight of bras we collect – so every bra counts!

Posted by East Lothian Libraries at 05:01 No comments: 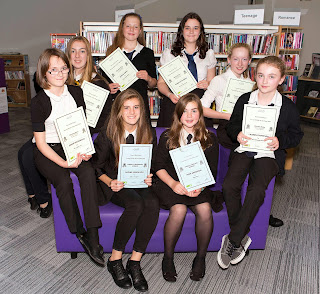 Two talented pupils, one from Midlothian and the other from East Lothian, have won the top prizes in a writing competition open to all young people in the two counties organised by Tyne & Esk Writers’ Group.

The Writers of the Year were chosen from the winners of the four categories in the competition; primary prose, primary poetry, secondary prose and secondary poetry. There were eight winners overall, four from East Lothian and four from Midlothian.

At the awards ceremony at Tranent Library in East Lothian all the winners were presented with their prizes; a £20 book token and a family day out to the Scottish Seabird Centre. The two overall Young Writers of the Year also received an iPod shuffle.

Tom Murray, Creative Writing Fellow for Tyne and Esk Writers’ and judge of the competition said “The standard of entries once again demonstrated the wealth of creative talent across the two regions”.

The competition sponsored by The Seabird Centre in North Berwick and organised by Tyne and Esk Writers in conjunction with East and Midlothian Libraries attracted over 700 entries this year.

Congratulations to all the winners of this competition who will hopefully go on to be successful writers of the future.