The new library and local office in Tranent is named after George Johnstone. Here's why. 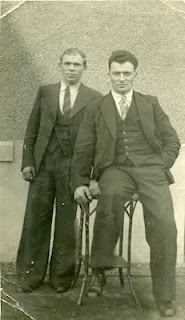 Deep underground at Tranent’s Fleets No. 1 Colliery on 1st March 1929 water began to flood in on a miner called George Johnstone.


It was soon apparent that the torrent was so great that the lives of 50 men working elsewhere in the mine were under threat. Despite being warned that he would lose his life if he tried to save them, Johnstone made his way towards the unsuspecting men but when he got to them they found their escape route blocked. Using their accumulated knowledge they worked their way close to an abandoned underground road and tunnelled, by hand, for five hours to dig their way out.

Calls to reward Johnstone’s bravery did not fall on deaf ears. In April he was awarded the Daily Herald Order of Industrial Bravery certificate and medal, before an audience of MPs, councillors and assorted VIPs. Three months later he was awarded the Certificate of the Order of St John of Jerusalem, and a silver watch from the Carnegie Trust Fund. The watch bore the inscription:

Johnstone and his father and brothers were all talented musicians, playing in a number of dance bands in the 1950s and 1960s. George played a number of BBC broadcasts, and his father Jim had the pleasure of playing with the great Jimmy Shand. They reached such heights despite not being able to read a note of music.

Posted by East Lothian Libraries at 07:08 No comments:

We are holding a series of events to celebrate National Libraries Day on Saturday 9th February.  If you haven’t been in to visit your local library for a while why not pop in and see what is happening. Events will be running in all libraries  from Monday 4th February up until the day itself on  Saturday 9th February and range from a Knit and Natter session at Musselburgh to special Bookbug sessions in various libraries and i-pad taster sessions. The major focus for the celebrations will be at the new library in the George Johnstone Centre,  Tranent. Choose your books to the sound of music provided by pupils from Ross High on the  Friday morning.  On Saturday  a special Bookbug session with a guest appearance by Bookbug, local community groups will be on hand to talk about their work, there will be information about how to get involved in  book groups and refreshments will be served. Other highlights include a musical medley and piano solo by  Aberlady and Gullane Parish Church Junior Choir  at Gullane Library at 11 on the Saturday. Further details of all events available  from your local library or  on-line at www.eastlothian.gov.uk. and  on facebook.
Posted by East Lothian Libraries at 07:02 No comments:

Why spend money with Amazon when you can borrow the very latest books and cds for free, and dvds for £1.00 a week? Log in to your account on our catalogue, select any item and then choose the library you’d like to collect it from on the drop down menu. Don’t worry about getting carried away and ending up with piles of books and dvds that you can’t possibly manage to read or watch in time; create your own wish list then work your way through it at your leisure, or have them ready in time for your next holiday. Register with library elf and you’ll receive e-mails telling you when your items are available for collection and warning you a few days before they’re due back. Check out our audio download service for books to listen to delivered straight to your pc, iPod or most MP3 devices.

If your New Year resolution is to read, watch and listen more but spend less, then use your local library and we’ll help you do just that!

Posted by East Lothian Libraries at 09:44 No comments:

Please note that as from 28th January all library members will need their library card to use our services. This change is to protect your personal data and information and to comply with the Data Protection Act. We're giving a couple of weeks notice to ensure that everyone has time to make sure they have their card. If not, please visit any library to get a new one, but make sure you have proof of ID with you. If you have a travel pass, that can also be used as your library card, just ask the staff for details.
Posted by East Lothian Libraries at 07:09 No comments: